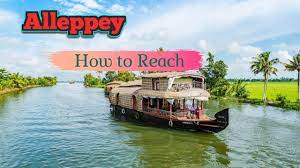 Alappuzha is a city on the Laccadive Sea in the southern Indian state of Alappuzha.
It’s best known for houseboat cruises along the rustic Kerala backwaters, a network of tranquil canals and lagoons.

How to Reach Alleppey by Air

The nearest airport to Alleppey which is Cochin International Airport, located around 78 km away, is. The airport connects Alleppey to all major domestic cities including Delhi, Mumbai, Chennai, Bangalore, Ahmedabad, Pune and Hyderabad.

How to Reach Alleppey by Road

The National Highway 66 passes through the city, connecting it to other major cities like Coimbatore, Ernakulam, Thrissur, Kollam and Trivandrum via state run KSRTC buses. Luxury air-conditioned buses operate from Chennai, Mysore, Bangalore and Coimbatore to Alleppey.

How to Reach Alleppey by Rail

The Alleppey Railway Station is located about 4 km away from the city centre and connects Alleppey to other major cities like Trivandrum, Cochin, Vellore, Coimbatore, Chennai, Delhi, and Mumbai. From the railway station, you can go by a bus, hire a taxi or get in an auto-rickshaw to reach the main city.

Darjeeling Tour Guide; How to reach

Kodaikanal Tour Guide; How to reach