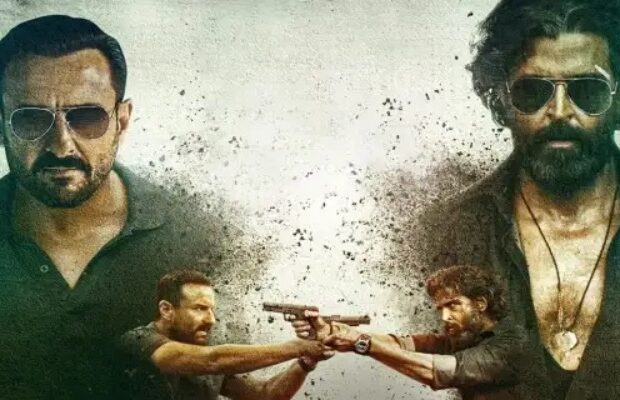 The upcoming Dussehra holiday would be advantageous for Vikram Vedha and should help the film’s attendance numbers. Box office statistics in detail

Vikram Vedha, starring Hrithik Roshan and Saif Ali Khan, had a weak opening weekend in India, earning only Rs. 37.30 crore. The movie opened on Friday at Rs 10.35 crore, increased to Rs 12.50 crore on Saturday, and then saw another 15% increase on Sunday to finish with a take of around Rs 14.50 crore. Although the film’s performance has improved steadily over the weekend, the increases have not been substantial enough to get it to the anticipated level.

Due to the fact that Sunday was also Gandhi Jayanti Holiday, the leap should have been much greater to bring the film closer to the Rs 17 crore mark. Mass appeal films frequently outperform on this day, and who better to observe this than Hrithik Roshan? The Monday test will determine the direction the movie will take in the coming days, so all eyes are on it right now. Hold on Monday will determine whether it exceeds or remains below the Rs 75 crore threshold.

The Wednesday Dussehra holiday will be advantageous for the movie and should help the box office somewhat. Despite praise from the media community, Vikram Vedha’s box office performance appears to have been negatively impacted by the remake factor. Jersey and Vikram Vedha are two examples of remakes that failed to captivate audiences since a large portion had previously watched the original, which was freely available on numerous platforms and dubbed in Hindi.

Speaking of performance, Vikram Vedha has had good success with national multiplex chains in major cities, but the mass belts have not joined in. This comes as a surprise considering that the trailer was edited with a large audience in mind and is packed with dialogue and action. The Vikram Vedha weekend in the north may have received Rs 40 crore more had there been better support from mass belts. Gujarat’s market has also struggled, and the Narvatri season is a major factor in this (in addition to the dark theme). Perhaps better results would have come from an October 5 release. For more information on Vikram Vedha’s box office performance.