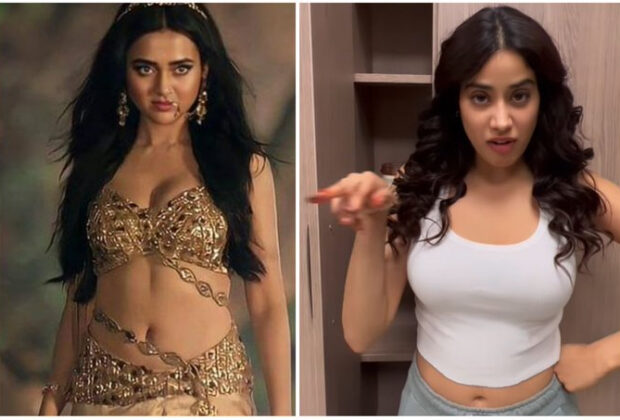 Tejasswi Prakash’s famous midnight walk scene from Naagin 6, a well-liked drama, was recreated by Janhvi Kapoor with her unique twist.

Janhvi Kapoor is very active on social media and has a significant following on Instagram. Janhvi has been on top of her Instagram game lately, sharing everything from photos of her travels to shots from photo shoots. The actor from Gunjan Saxena, The Kargil Girl has been seen posting amusing videos of herself doing strange things. Janhvi is causing a stir once more after sharing another intriguing video in which she can be seen performing off Tejasswi Prakash’s well-known speech from Naagin 6.

In the video, Janhvi could be seen sporting a white cropped tank top, grey pajamas, and her long, curly hair left open. Janhvi can be seen in the video indulging in a lot of chocolate to satisfy her late-night appetite. Her companion caught her red-handed recreating Tejasswi’s midnight stroll sequence from the well-known drama, and her performance is surely getting noticed. Janhvi captioned the photo, “Jab midnight cravings wali stroll ke beech koi tumhe pakad le.”

Janhvi Kapoor has clarified what she meant when she called making a movie with her family “nepotism” for the uninitiated. She has been “exhausted” and has forgotten everything she has said in interviews, the actor alleged, citing her demanding schedule. She is currently promoting her new film, Good Luck Jerry.

Spotify has 188 million Premium clients, yet keeps on losing cash