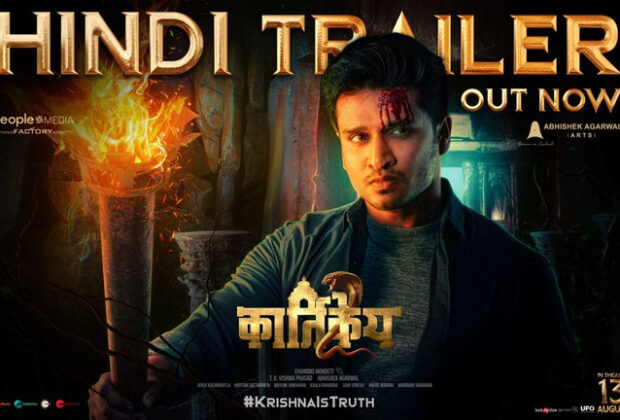 The upcoming August 13 theatrical release of “Karthikeya 2,” starring Tollywood actor Nikhil Siddhartha, will be his next screen appearance. Recently, the theatrical trailer for “Karthikeya 2” was released, and it makes the movie seem like a mythical quest. A quest to uncover secrets buried beneath the sea close to Dwaraka lies at the heart of the story.

The technical skill the trailer possesses is what immediately draws attention. The staples are the breathtaking images and the spiritual but opulent background score.The trailer is currently trending on YouTube thanks to its incredible music, stunning images, and thrilling features. In the teaser, which teases an intriguing story about a doctor with a curious mindset who is constantly curious to learn more about unexplained things, a hard-hitting journey of main actor Nikhil Siddhartha on snow, a boat, and in war is portrayed. The associated events are presented in a magnificent manner.

On August 13, “Karthikeya 2” will be theatrically released throughout all of India. The movie is being released at the same time in Kannada, Telugu, Tamil, Malayalam, and Hindi. Nikhil Siddhartha, Anupama Parameswaran, Anupam Kher, Srinivasa Reddy, Harsha Chemudu, Adithya Menon, Praveen, and Satya all appear in the movie. Chandoo Mondeti is the director of the movie. The film is being produced by Abhishek Agarwal and TG Vishwa Prasad under the names Abhishek Agarwal Arts and People Media Factory, and Kaala Bhairava is providing the soundtrack. Karthik Ghattamaneni will be in charge of the film’s cinematography, and Goutham Nerusu will handle the editing.

Canada Has Over 10 Lakh Job Vacancies And Counting