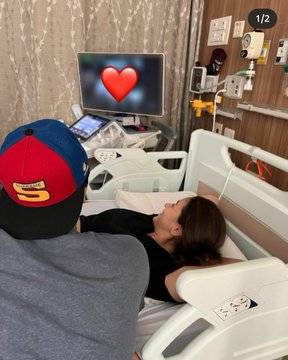 The actress on Monday shared the happy news of her pregnancy on social media. Sharing a photo from their ultrasound appointment, Alia captioned the photo saying “Our baby ….. coming soon.”

The happy news of Alia’s pregnancy comes just over two months after the couple tied the knot in a hush-hush ceremony at their Bandra home. Ranbir and Alia wed in a private ceremony on April 14, surrounded by their family and closest friends.

The photo accompanying the caption shows what looks like Alia on a hospital bed and husband Ranbir Kapoor, pictured from behind, looking at the results of an ultrasound on the monitor. The result has been obscured by a red heart and the next photo in the post is one of a lion, lioness and a cub.

The post has been flooded with comments congratulating Alia and Ranbir as well as some suggesting it might be promotional activity for the couple’s new film Brahmastra.

The actress also shared a picture of a lioness nudging a lion and a cub looking on. The couple have shared their love for nature and have been heading out on romantic safaris in Africa. The couple began their New Year 2022 on a safari and shared some goofy clicks from their time in the great outdoors.

Not everyone took Alia Bhatt’s post at face value. “It’s a strategy to promote Brahmastra,” read one fan comment. “Is this for a movie or something,”

Arjun Kapoor Celebrated B’day With Malaika Arora; They get twin in white as they celebrate his birthday in Paris; see PICS of their casual vacation!