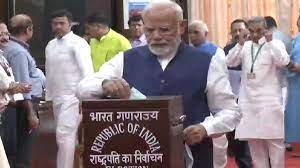 All the elected members of the Lok Sabha and state legislatures begin voting for the election of the next President of the country on Monday. Draupadi Murmu from the BJP-led NDA and Yashwant Sinha from the opposition’s side are the presidential candidates. The counting of votes and the declaration of election results will take place on July 21 and the Chief Justice of India will administer the oath of office to the new President on July 25.

Elections to choose the 15th President of India are being held today — a race between NDA candidate Droupadi Murmu and the opposition’s Yashwant Sinha. The contest, though, is seen as all but over, counting parties that declared support for Ms Murmu.

While the Eknath Shinde faction, allied with the BJP, was supporting the NDA candidate, the faction led by Uddhav Thackeray is also supporting her.

It is expected that Daruapadi Murmu, the NDA candidate, will easily win the election, making her the first tribal president and the youngest President in country history.

The monsoon session of the parliament, which also begins today, will start at 11 am and will continue till August 12. There will be 18 sittings during the session.