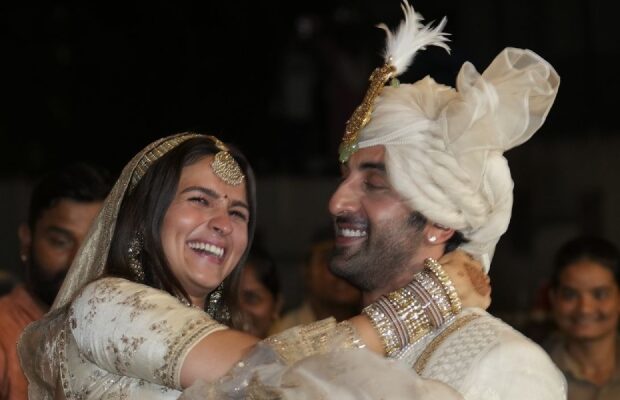 Alia Bhatt’s sleeping positions have been discussed by Ranbir Kapoor. Here’s why he claimed that while in bed with Alia, he had difficulties.

Actor Ranbir Kapoor has discussed his wife Alia Bhatt’s sleep-related shenanigans and how he puts up with them. In a recent interview, Ranbir discussed his difficulties in getting Alia Bhatt to sleep with him. When asked what aspect of Alia he finds admirable, Ranbir responded that she is “excellent” in whatever she does.

After dating for many years, Alia and Ranbir exchanged vows on April 14, 2022, in a small ceremony at his Mumbai home. The pair revealed that Alia is expecting her first child with Ranbir two months after their wedding. In June of this year, Alia shared a picture of herself lying in a hospital bed with Ranbir by her side on Instagram.

When questioned about Alia’s qualities that Ranbir “tolerates” in an interview with Bollywood Bubble, the actor responded, “When she sleeps, she begins to move diagonally, which causes your bed to gradually get smaller as a result. I soon find myself wrestling on the corner of the bed with her head and legs somewhere else.”

In response to the same query regarding Ranbir, Alia stated, “I like Ranbir’s silence as one of his qualities. He listens to others quite well. And another thing I can live with is his quiet. Because he is so zen, he sometimes doesn’t answer when I (striking Ranbir) need him to.”

Brahmastra Part One: Shiva, the most recent film by Ayan Mukerji, featured Alia and Ranbir for the first time together. The high-budget fantasy adventure epic was launched on September 9 and has garnered more than 400 crore in worldwide box office revenue.

Amitabh Bachchan, Mouni Roy, and Nagarjuna also appear in Brahmastra, and Shah Rukh Khan and Deepika Padukone make brief appearances. Director S S Rajamouli is presenting the Tamil, Telugu, Malayalam, and Kannada versions of the film, which is now playing in theatres in Hindi in 2D, 3D, and IMAX 3D.

Does Apple’s iPhone 14 get cheaper after it’s manufactured in India?