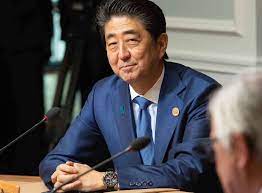 Shinzo Abe, former prime minister of Japan, was shot at twice and collapsed during a speech in the city of Nara.

Former Japan Prime Minister Shinzo Abe was shot at on Friday in Nara while campaigning for the upcoming election, said a Reuters report quoting the government spokesperson. The 67-year-old ex-world leader is showing no vital signs after being rushed to hospital, said news agency AFP quoting Japanese media.

A 41-year-old man Tetsuya Yamagami, believed to be a resident of Nara City, has been arrested on suspicion of attempted murder for shooting at Shinzo Abe, reported Japanese media house NHK quoting police sources. It added that Abe was likely hit from behind by shotgun fire.

“Former Japanese Prime Minister Abe Shinzo collapsed during a speech in the city of Nara, in western Japan. Initial reports say he may have been injured. An NHK reporter on site heard something that sounded like a gunshot, and saw Abe bleeding,” the agency said in an alert.

Chief Cabinet Secretary Hirokazu Matsuno, addressing the media on Friday morning, said that he did not know of Abe’s current condition. “Such an act of barbarity cannot be tolerated,” he said. Meanwhile, Nara city fire department said that Abe was in cardiopulmonary arrest before he was taken to the hospital.

As a mark of our deepest respect for former Prime Minister Abe Shinzo, a one day national mourning shall be observed on 9 July 2022: PM Narendra Modi