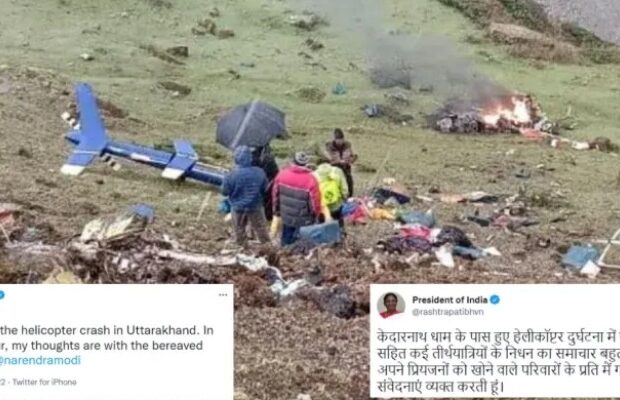 Officials said the helicopter carrying pilgrims crashed shortly after takeoff from the Kedarnath shrine near Garud Chatti in Rudraprayag at around 11.40 a.m.

“The bodies of six pilgrims and a pilot have been recovered,” they said.

According to preliminary findings, the crash was caused by bad weather and poor visibility.

“The precise cause of the accident will be determined following a thorough investigation,” said C Ravi Shankar, CEO of the Uttarakhand Civil Aviation Development Authority.

According to aviation regulator sources, a loud noise was heard before the helicopter caught fire. “A Bell 407 helicopter VT-RPN belonging to Delhi-based Aryan Aviation has crashed on the way from Kedarnath to Guptkashi, possibly due to cloudy weather,” sources told NDTV.

Images from the scene showed a massive plume of smoke.

Pushkar Singh Dhami, the state’s chief minister, has ordered a thorough investigation into the crash.

Jyotiraditya Scindia, Civil Aviation Minister, expressed his sadness over the incident and stated that they are in constant contact with the state government.

When the cameras aren’t around, this is how ‘different’ Kate Middleton is.

Asees Kaur: Making reels is how I connect with audiences