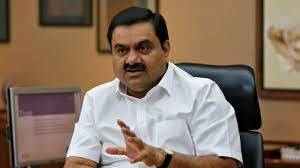 Mukesh Ambani, a fellow countryman, is ranked 10th on the list with $90 billion.
The Adani Group Chairman is famed for turning a small commodities trading business into a conglomerate.

According to Forbes’ Real-Time Billionaires List, Indian entrepreneur Gautam Adani has passed Microsoft co-founder Bill Gates to become the fourth richest person in the world. On Thursday, the 60-year-old business tycoon outperformed Mr. Gates, whose fortunes stand at $104.6 billion, with a net worth of $115.5 billion.
Mukesh Ambani, a fellow countryman, comes in at number 10 on the list with $90 billion.

Elon Musk, the founder of Tesla and SpaceX, is at the top of the list with $235.8 billion. Musk has been embroiled in a major controversy since he attempted to purchase Twitter but ultimately decided against it.

The chairman of the Adani group is renowned for growing a modest commodities trading company into a conglomerate that includes renewable energy, ports, and mining.

When he passed Mr. Ambani to become the richest person in Asia, Bloomberg recently noted that “some of Adani Group’s listed stocks have soared more than 600 percent in the past two years on bets that his push into green energy and infrastructure will pay off as PM Modi looks to revive the $2.9 trillion economy and meet India’s carbon net-zero target by 2070.”

“Adani has taken over seven airports and about 25% of India’s air traffic in just three short years. “His organization now controls the largest airport operator, power generator, and non-state retailer of city gas in the nation,” said the business news source.

On Thursday, Mr. Adani announced that his company, along with Gadot, had won the bid to privatise an Israeli port.

Of Israel’s three main international seaports, the Port of Haifa is the biggest.

Adani Data Networks has submitted an application to take part in the upcoming 5G auction, along with Reliance Jio, Bharti Airtel, and Vodafone Idea.

There may be strong bids for some frequency bands during the spectrum auction, which is set to begin on July 26.

On Saturday, the Adani Group announced that it was competing to buy spectrum. The company said that this spectrum would be used to build a private network to service all of its operations, including data centres, airports, and power.

Smriti Irani’s Family Restaurant in Goa, in the Storm’s Eye