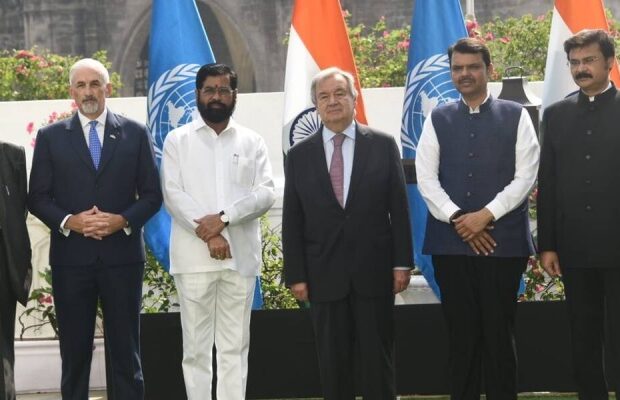 This is Antonio Guterres’ first visit to India since taking office for the second time in January. He previously visited India (during his first term) from October 1 to 4, 2018.

On the first day of his three-day visit to India, UN Secretary-General Antonio Guterres paid tribute to the victims of the Mumbai terror attacks at the Taj Mahal Palace hotel on Wednesday.

Guterres said he was deeply moved to be in Mumbai, the site of one of “the most barbaric terrorist acts in history,” in which 166 people died.

“Terrorism is pure evil.” Terrorism cannot be justified by any reason, pretext, cause, or grievance. In today’s world, it has no place. “I am deeply moved to be here, where one of the most heinous terrorist acts in history took place, killing 166 people,” he said.

Guterres paid tribute to the victims, saying, “They are heroes of our world.” “I’d like to express my heartfelt condolences to their families, friends, the people of India, and everyone else who lost their lives in Mumbai.”

This is Guterres’ first trip to India since taking office for the second time in January. He previously visited India (during his first term) from October 1 to 4, 2018.

“Warm welcome to UN Secretary-General @antonioguterres as he arrives in Mumbai for his official visit to India from 18-20 October 2022,” tweeted Arindam Bagchi, the ministry’s spokesperson.

Guterres will join Prime Minister Narendra Modi on Thursday in Gujarat (Ekta Nagar, Kevadiya) for the launch of the Mission LiFE (Lifestyle for Environment) booklet, logo, and tagline.

Modi introduced the concept of LiFE at COP26 in Glasgow in November 2021. Modi then urged the global community of individuals and institutions to propel LiFE as an international mass movement toward “mindful and deliberate consumption, rather than mindless and destructive consumption” in order to protect and preserve the environment.

According to the release, External Affairs Minister (EAM) S Jaishankar will hold bilateral discussions with the UN Secretary-General on issues of global concern, steps to deepen India’s engagement with the UN, including India’s upcoming presidency of the G20, and reformed multilateralism.

Guterres is expected to pay floral tributes at the Statue of Unity in Kevadiya.

Asees Kaur: Making reels is how I connect with audiences