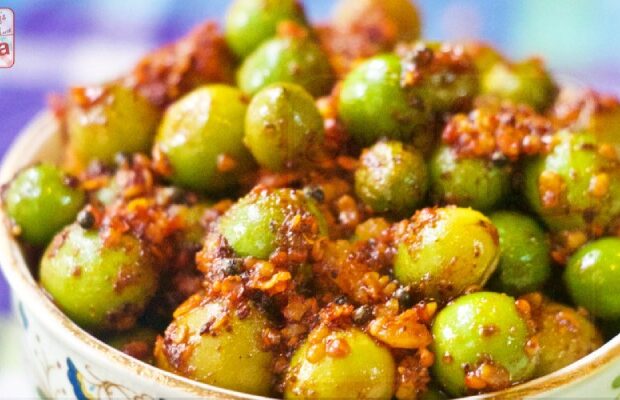 In India, the very nutritious fruit known as karonda is frequently used to make mouthwatering pickles and jellies. These 3 delectable achaar and murabba recipes are a must-try.

The sour and sweet fruit known as karonda is a staple in pickles and jams in India and is consumed both raw and ripe. Karnataka, West Bengal, Maharashtra, Rajasthan, and Bihar are just a few of the states where karonda, often referred to as Bengal Currant, is grown. Both fresh and dried karondas contain other nutrients like carbohydrates, fibre, potassium, protein, and vitamins and minerals like iron, calcium, Vitamin C, and Vitamin K in addition to being rich in these elements. Karonda helps improve defences against seasonal illnesses and lowers chance of developing heart disease. Additionally, it treats anaemia; nevertheless, persons who have kidney stones or a peptic ulcer should avoid using it.

“Karonda is believed to improve libido in women, which increases fertility in addition to treating diseases including anaemia, constipation, and other vitamin deficiencies. Unripe karondas are typically used to produce pickles, but ripe fruits, which contain a lot of pectin, are used to make jams, jellies, and wine. Because of its excellent nutritional value, it is a perfect food for all age groups, but especially for growing children, expectant mothers, and lactating mothers whose dietary needs are at their highest compared to other life stages “Divya R, Senior Executive Nutritionist at Cloudnine Group of Hospitals, Kanakapura Road, Bengaluru, says.

Below are few recipes that makes karonda a must-try food.

Method: Combine chopped, deseeded karondas with salt, jaggery, turmeric, cumin, and chilli powder in a glass jar. Allow the mixture to sit in the sun for 8–10 days to ferment. Once thoroughly combined, serve it with roti, rice, etc.

Method: In the boiling water, add descended karondas. To assist in binding the jelly, fruits high in pectin, such as ripe apples, papayas, or pears, can be added to the same boiling water. Cook the items in the water until the flavour is well infused. Using a thin muslin cloth, strain the mixture. The water that has been drained should now contain dates powder or coconut jaggery powder, and it should be simmered until it thickens. When the mixture has thickened, pour it into a glass dish and let it sit for two to three hours. In order to keep the jelly intact, gradually loosen it from the bowl’s corners and flip it upside down.

Method: Unseeded karondas should be added to a pan. When the mixture is boiling, add sugar or dates syrup. Continue stirring until the fruit has entirely absorbed the sweetness and all of the moisture has evaporated, leaving a thick consistency behind. To bring out the lovely flavour combination, add salt and roasted jeera powder after it has been well cooked.

• Enhances blood circulation, which lowers the risk of cardiovascular disorders.

• Treats anaemia: Being a strong source of iron and vitamin C, it’s excellent for treating anaemia, particularly during pregnancy and nursing. It also aids in easing scurvy symptoms.