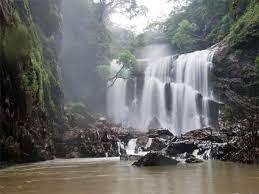 Dandeli is a taluk in Uttara Kannada district of Karnataka, India, in the Western Ghats region.

The Dandeli Wildlife Sanctuary, with its trails and dense forests, is home to animals including black panthers, monkeys and elephants, as well as many bird species. A temple stands at the entrance to the limestone Kavala Caves, known for their stalagmite formations. West of the caves, Anshi National Park encompasses the Kali Tiger Reserve.

Is Dandeli a good place?

It is amongst the few places to visit in Dandeli that boasts of an incredible landscape which is filled with river valleys, verdant hills and scenic beauty.It offers a refreshing escape from the mundane activities and tourists here can indulge in a number of activities like wildlife safari, white water rafting.

How to reach Dandeli by Air?

Dandeli does not have its own airport. The approachable airport to this city is Belgaum which connects this region with different parts of the country. It is around 90 km away from the heart of Dandeli. From the airport, one can easily hire private cabs which take around two and a half hours to reach the city.

There is no regular trains to Dandeli from other major cities of the country. The nearest Railway station is at Dharwad which is located at a distance of 46kms.

Rishikesh Tour Guide; How to reach