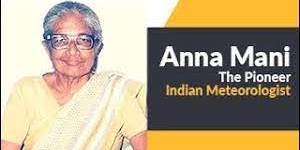 One of the first women to work as a scientist in India, Anna Mani is renowned for her research and development of the reliable weather forecasting technology used in India today.

Anna Mani’s Birth Anniversary: The well-known Indian physicist and meteorologist Anna Mani, one of the nation’s first female scientists, marked her 104th birthday on Tuesday (August 23, 2022) by having a special Doodle created. Anna Mani, who was born on this date in 1918, is well-known for her study and work that enabled India to provide precise weather forecasts.

Mani, popularly known as the “Weather Woman of India,” was a lifelong reader who was raised in the former state of Travancore (present-day Kerala). Following high school, she attended Women’s Christian College (WCC) for her Intermediate Science course before transferring to Presidency College, Madras, where she earned her Bachelor of Science with honours in physics and chemistry.

After graduation, Anna Mani taught at WCC for a year and won a scholarship for post-graduate studies at the Indian Institute of Science, Bangalore. She then, under the guidance of Nobel Laureate Sir CV Raman, studied spectroscopy, specializing in diamonds and rubies.

Mani published five papers, completed her Ph.D. dissertation between 1942 and 1945, and also began a graduate program at Imperial College, London, where she learned to specialize in meteorological instrumentation.

Upon her return to India in 1948, Anna Mani started working for the India Meteorological Department, where she assisted the nation in creating and manufacturing its own meteorological equipment. She was appointed division chief in 1953, and under her watch, more than 100 weather instrument designs were streamlined and standardised for mass production.

Mani created a network of sun radiation monitoring stations and wrote several publications on measuring renewable energy throughout the 1950s.