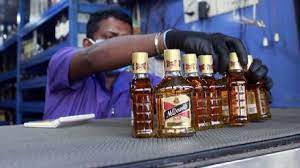 New Delhi: The Delhi government on Sunday agreed to extend current liquor shop licenses till August 31 in order to avoid turmoil brought on by a lack of alcohol in the city, according to officials.
The 468 private liquor stores in Delhi were set to close their doors starting on Monday after their licenses expired on July 31.

But they said that the booze stores wouldn’t open until after the Excise Department gave the go-ahead following the Lieutenant Governor’s approval.

“The administration has sent the Lt. Governor the Cabinet’s decision to extend the current liquor vending licenses for one more month, till August 31. “After LG’s permission, orders enabling the booze establishments to stay open through July 31 will be issued,” authorities stated.

After realising that the Excise Policy 2021-22 was unable to achieve the desired objectives of bringing in greater revenues and that its implementation is being scrutinised for alleged rule violations and procedural lapses, officials said, the Delhi government has decided to return to the old excise regime and run liquor stores through its agencies.

They stated that beginning on September 1, the government liquor outlets will be open for business for a period of six months, during which time the private vendors will continue to be in business.

“This was essential as the government has already chosen to revert to the previous excise policy regime and manage stores through its agencies, a process that could produce shortage and turmoil as the new shops will take days to open,” said a government official.

On Saturday, the administration declared that it would run stores for the next six months under the previous excise regime. 468 retail liquor outlets in the city were operating under the Excise Policy 2021–22 with licences that expired after July 31.

However, a large number of liquor stores in the city had to close after running out of stock due to discounts and promotional offers like buy one, get two free.

“People are coming over to grab whatever they can of the additional beer and booze that is available. Those who requested certain brands have also come up empty-handed “explained the manager of a liquor store in Laxmi Nagar.

Customers are now heading to neighbouring Noida, Ghaziabad, Gurgaon, and Faridabad for their quota as booze stores are running out of stock, according to a consumer named Vivek outside a shuttered liquor vend in Delhi’s Shekh Sarai. The rush was worse on Saturday.

A banker from Mayur Vihar Extension claimed that while he used to be able to buy his favourite brands locally, the supply was now exhausted.

“The stores in the local mall had nearly nothing left after running out of stock. I’ll now ask pals in Noida and Gurgaon to keep me well-stocked till business picks back up here “said he.

The Delhi government corporations, which were formerly engaged in the retail sale of alcohol prior to the implementation of the new Excise Policy 2021-22 in November 2021, have begun activating their system to open liquor outlets.

Out of the 864 liquor stores in Delhi, 475 were operated by the four corporations (DSIIDC, DTTDC, DCCWS, and DSCSC) during the previous excise policy era. There were 389 private stores licenses that people owned.