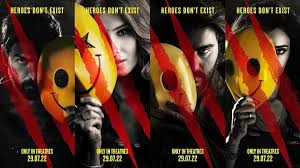 Ek Villain Returns opened on a fair note as it collected Rs 6.50 cr on its first day.

Bollywood has had a tremendously difficult year as a result of the films’ poor openings. The star-driven movies have also struggled to draw audiences. Only 4 films this year have already made at least Rs. 10 crore in box office receipts. Following Bhool Bhulaiyaa 2, Bachchhan Paandey, Prithviraj, Shamshera, Gangubai Kathiawadi, and JugJugg Jeeyo on the list of top Bollywood openings for this year, Ek Villain Returns was released yesterday and debuted at number seven.

Ek Villain Returns’ debut is respectable, but only in light of the circumstances; a multi-starrer movie with a famous filmmaker like Mohit Suri deserves to have a considerably bigger opening. A franchise value should also be expected because the movie is a sequel to a smash hit, but in this case it didn’t seem to exist because it debuted far lower than the first one. However, compared to the star-driven flicks of Ranveer Singh, Tiger Shroff, and Ajay Devgn, which were essentially a bust, the start was better.

Have a look at the biggest openings secured by Bollywood movies this year:

Bollywood would expect to cover lost ground in the last five months, so that the year can end on a satisfactory note. Probable contenders to enter this list are Raksha Bandhan, Laal Singh Chaddha, Liger, Brahmastra, Vikram Vedha, Ponniyin Selvan, Ram Setu, Thank God, Bhediya, Cirkus, Bhaijaan and a few other films. For the time being, the industry just has to try to pull crowds into theatres and develop the habit of going to cinemas, since that is extremely critical for the business of movies in the future.

Fans are upset as BGMI disappears from the Play Store and App Store.