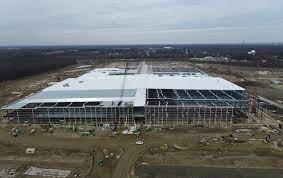 LG Chem, a Korean battery manufacturer, and General Motors (GM) are ending their joint venture facility for the production of batteries.

Over the past year and a half, GM has been on a tear, establishing new locations for battery production through its joint venture with LG, Ultium. However, its fourth production facility is said to have been abandoned.

Ultium LLC revealed in the fourth quarter of last year that the company would spend $2.5 billion to build its fourth battery production facility in New Carlisle, Indiana. GM, on the other hand, stated in a press conference at the end of the week, “We’ve been very clear that our plan includes investing in a fourth U.S. cell plant, but we’re not going to comment on speculation,” indicating that the situation surrounding the plant’s construction may be more complicated than was initially reported.

GM’s current ties to LG through its battery manufacturing subsidiary Ultium could be a significant obstacle. It is still unknown whether Ultium would be able to manage that plant if GM decided to work with a different battery manufacturer, or whether it would require its own management, who could then collaborate with the new supplier; whether it’s CATL, SK ON, or another manufacturer. However, suppose GM and LG continue their collaboration and open the fourth location. The American automaker may be required to continue a potentially difficult negotiation process in that scenario.

Regarding LG, the South Korean battery manufacturer issued a statement to the Wall Street Journal on Friday stating that negotiations were still in progress.

It is evident that the partnership model may not always be advantageous as legacy automakers continue to look for ways to improve their battery manufacturing capabilities in the coming years. Additionally, it is evident that Tesla’s more direct vertical approach also has its advantages, despite the fact that many people have appreciated sharing the cost of creating these numerous production locations with battery manufacturers. It is still unknown whether additional businesses will follow suit in the foreseeable future.

7% of Vox Media’s workforce will be laid off

What To Do To Start Composing Ali Nouri, A Musician Named Irani