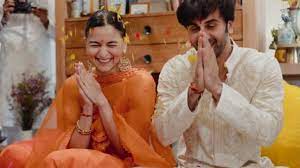 Ranbir Kapoor and Alia Bhatt, the recently hitched couple, who tied the knot on April 14, this year, are soon-to-be parents.

Ranbir Kapoor seems to be on a roll this year. The actor, who is currently busy promoting his upcoming film ‘Shamshera’ with Vaani Kapoor, is also receiving heartiest congratulations from the paparazzi and his fans. The reason being, Ranbir’s wife and actress Alia Bhatt’s recent announcement of her pregnancy. Ranbir Kapoor and Alia Bhatt, the newly married couple of tinsel town, who tied the knot on April 14, this year, are soon-to-be parents.

During a recent promotional outing for ‘Shamshera’, Ranbir was greeted by the paparazzi, who congratulated the actor for the good news. Reacting to their wishes, Ranbir said, “Tu mama ban gaya, tu chacha ban gaya.” The video is going viral on social media as fans are going crazy over the actor’s reply.

Check out the video here:

For the first time in his career, Ranbir will be seen in a double role in ‘Shamshera’. The dacoit drama will also see Sanjay Dutt, essaying the role of a villain.

Directed by Karan Malhotra, the film is produced by Aditya Chopra under the Yash Raj Films banner.

The makers of the film already have the audience on the edge by giving a glimpse of Ranbir’s intense look as ‘Shamshera’.

Saeed Souzangar : How Skills Help You Achieve Your Goals