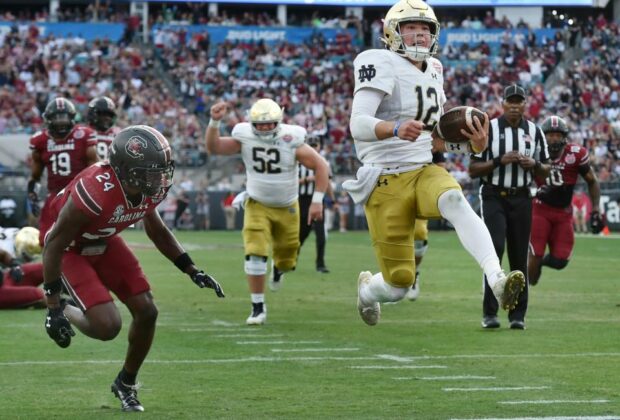 In addition to the two interceptions that were turned into touchdown passes by No. No. 21 Notre Dame defeated 19 South Carolina, 45-38, on Friday in a wild TaxSlayer Bowl.

Big plays and memorable moments abound in the Gator Bowl’s highest-scoring game ever. On a third-and-7 play with 1:38 remaining, Buchner found Mitchell Evans, a tight end, wide open for a 16-yard touchdown.

“The game we played was great. We won the game, and I couldn’t be happier,” Buchner said. “But for me, personally, I didn’t play to the standard I wanted to play. I think I accounted for two extra touchdowns they didn’t want me to account for. That’s not the standard I hold myself to.”

After Drew Pyne entered the transfer portal following the regular-season finale, Buchner regained the starting position and threw for 274 yards and three touchdowns. Additionally, he ran for two scores and 61 yards.

However, his three interceptions almost proved to be too much.

Despite South Carolina’s scoring on the two pick-sixes and special teams, Notre Dame (9-4) overcame a 14-point deficit to win. One of the oddest touchdowns in bowl lore occurred when quarterback Kai Kroger connected with long snapper Hunter Rogers.

For the Gamecocks (8-5), Spencer Rattler completed 29 of 44 passes for 246 yards, an interception, and two touchdowns to Xavier Legette.

“For us to be down that many players and for those guys to play their butts off like they did and leave everything out there like they did, I’m really really, really proud to be their coach,” Gamecocks coach Shane Beamer said. “In that locker room there’s a hurtin’ group of guys that left it all out there.”

“This is what real life is about: the ability to respond to situations,” Freeman said.