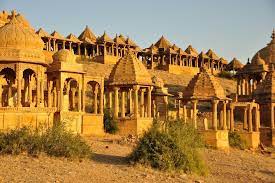 “The Golden city”, is a city in the Indian state of Rajasthan, located 575 kilometres (357 mi) west of the state capital Jaipur. The town stands on a ridge of yellowish sandstone and is crowned by the ancient Jaisalmer Fort. This fort contains a royal palace and several ornate Jain temples. Many of the houses and temples of both the fort and of the town below are built of finely sculptured sandstone. The town lies in the heart of the Thar Desert (the Great Indian Desert) and has a population, including the residents of the fort, of about 78,000. It is the administrative headquarters of Jaisalmer District. Jaisalmer was once the capital of Jaisalmer State.

Jaisalmer Fort is the second oldest fort in Rajasthan, The fort’s massive yellow sandstone walls are a tawny lion colour during the day, fading to honey-gold as the sun sets, thereby camouflaging the fort in the yellow desert. For this reason it is also known as the Sonar Quila or Golden Fort.
It is only living fort.where more then 4000 people live at a time.If you want to bring your phone inside you have to pay 100 rupees.Inside the fort there is Raja Rani Meuseum.

The lake sits just outside the city walls and was once the sole reservoir that controlled the entire supply of water to the arid city of Jasialmer! Located in the southern part of the city, the entrance to the lake is marked by beautifully carved yellow stone archway known as Tilon-ki-Pol.

The Jaisalmer War Museum is located 10 km short of Jaisalmer on the Jaisalmer – Jodhpur Highway. The inauguration of the Museum took place in the Golden Jubilee Commemoration Year of the 1965 India Pakistan War.

How to reach Jaisalmer by air?

The closest domestic airport is Jodhpur Airport, which is the best way to reach Jaisalmer by air.
There are regular flights to Jodhpur from cities like Delhi, Mumbai, Kolkata, Chennai and Udaipur. From the airport, it will take you around 5 to 6 hours to reach Jaisalmer.

How to reach by train?