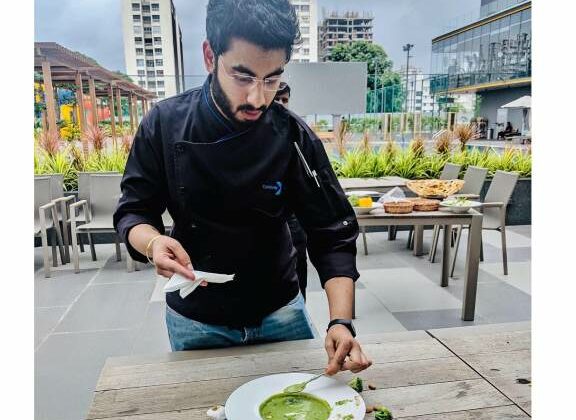 Akshat Parihar is a renowned corporate chef known for his ability to master different types of cuisine from around the world and fuse them with his culinary expertise. He has mastered many techniques like Molecular Gastronomy, which involves using astonishing cooking ingredients and components in food preparation while creating an outstanding visual appearance. One of the best things about Akshat is that he believes not only in the power of food to unite people from different ethnicities and religions but also that it can be one of humankind’s strongest mediums for promoting total peace!

“I think it’s important to keep pushing boundaries and redefining what food can do and its impact on people,” says chef akshat

Bringing a new dimension to the culinary arts, Akshat Parihar has earned himself the coveted “Molecular Gastronomic” title by fusing different cuisines from around the world and adding his special flair to create a uniquely innovative menu that is also colorfully enticing. He has mastered in more than 18 cuisines, having collaborated with many top leading hospitality brands.

Chef Akshat incorporates a fusion of flavors from the newest and trendiest ingredients available with classic and traditional food presentation. His main focus is to make sure that in spite of all the glamorous culinary wizardry that comes into play, Fine Dining Cuisine maintains its `root`, which means anchoring all foods in tradition; no matter where one goes in the world or what cuisine might be hot on your tongue at the moment, roots can never be forgotten.

He believes it is only through real knowledge – both culinary and cultural – and paying attention to the smallest details that one can truly create an authentic food experience for their guests.

During his early years, Akshat has worked with some of the best chefs in the industry, a fact that allowed him to develop his own style and exceptional talent in the realm of gastronomy.

His passion for it stems from the desire to give back what he was fortunate enough to learn while fostering his talent there. This is something that’s incredibly important to him because he believes in empowering and educating industry professionals, hoping to go beyond traditional gastronomy by pushing haute cuisine forward into new territory.

To uncover the lost and hidden tastes from around the globe, reinventing them and presenting them in a gastronomical way so that people will be amazed and learn more about different cuisines and cultures, and destinations around the world is my main focus.

Akshat Parihar says, “There would have been no better way to discover the world than through food.” An avid chef, he loves sharing recipes and tricks of the trade with others who are just getting started in their culinary careers. A strong believer in never giving up on your dreams – no matter how many failures you see yourself or others experience, he recommends that people take advantage of every opportunity they have to live out their dreams because very few people get the chance to do so. Says he, “never give up and keep trying even if you fail at times, as the final destination will be amazing and will make you forget all your negative experiences.”

All You Need To Know Before Using Chatbots

MARIO CANON – THE RISING STAR OF THIS ERA