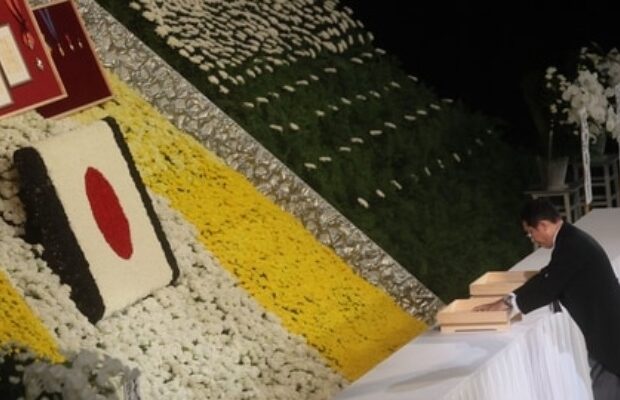 The funeral of Japan’s longest-serving prime minister is being attended by hundreds of representatives from around the world.

Shinzo Abe, who passed away in July after being shot at while giving a speech during an election campaign, is being buried, and Prime Minister Narendra Modi is among the world leaders there. Thousands of mourners and hundreds of international dignitaries gathered in Tokyo to pay their respects to Japan’s longest-serving prime leader.

Here are top updates on the Shinzo Abe funeral:

1. In a tweet, PM Modi on Monday night shared details of his Tokyo visit, and said that he would be paying last respects to Abe, who he remembered as “a dear friend and a great champion of India-Japan friendship”.

2. Ahead of the funeral, Modi also met Japanese PM Fumio Kishida. “Today we are meeting in this hour of sorrow. The last time I came I had a long conversation with former Japanese PM Shinzo Abe. India is missing Shinzo Abe and remembering him and Japan,” PM Modi was quoted as saying by news agency ANI.

3. “I’ve faith that under your leadership, India-Japan relations will deepen and scale new heights and we will be able to play an appropriate role in solving the problems of the world,” he further said.

4. PM Modi had held multiple meetings with Abe during his tenure. On July 8, when Abe’s death was confirmed, PM Modi had paid tributes to “one of my dearest friends, Shinzo Abe”. “He was a towering global statesman, an outstanding leader, and a remarkable administrator. He dedicated his life to make Japan and the world a better place,” he had written.

6. Facing criticism over the cost of event, Japanese PM Kishida has said that country’s longest serving premier deserves the honour. The funeral is taking place at Tokyo’s Budokan hall. About 1.7 billion yen (USD 11.8 million) was needed for the venue, security, transportation and accommodation for the guests, the government had said before the event, news agency AP reported.

8. More than 4,000 people – including Japan lawmakers – were said to be present at the event.

9. Abe’s ashes were carried to the venue and 19 rounds were fired from a cannon by an honour guard. The ex Japan PM had earlier received a private funeral.

10. Abe was assassinated on July 8 when he was delivering a speech for an election campaign.

Deepika Padukone is recovering after being taken to the hospital