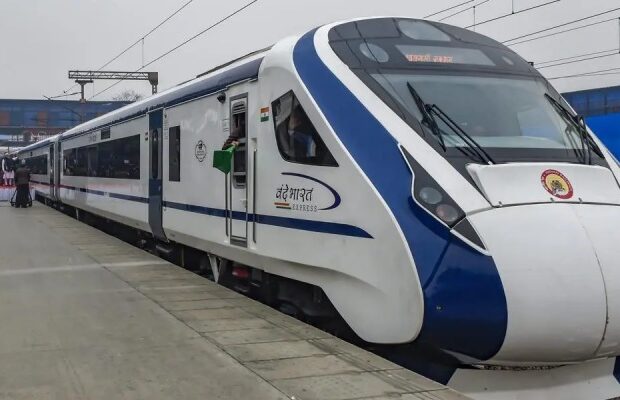 The fifth Vande Bharat Express, a semi-high-speed train that is said to have given the Indian Railways a facelift, is set to begin service next month on November 10. The train will travel from Chennai to Bengaluru and Mysuru.

On Thursday, Prime Minister Narendra Modi flagged off the fourth Vande Bharat Express train in Himachal Pradesh’s Una district. Jairam Thakur and Manohar Lal Khattar, the chief ministers of Himachal Pradesh and Haryana, were later seen riding on the high-speed train. From next week, the train will reduce travel time between Delhi and Chandigarh to three hours. According to a government statement, the travel time from Una to New Delhi will be cut by two hours.

“Vande Bharat 2.0 has more advancements and improved features, such as a 0 to 100 kilometre per hour acceleration time of 52 seconds and a top speed of 180 kilometres per hour. The improved Vande Bharat Express will weigh 392 tonnes, down from 430 tonnes in the previous version. It will also include a Wi-Fi content on-demand feature “The Prime Minister’s office emphasised this in a statement. It also boasts “aircraft-like travel experiences” and cutting-edge safety features such as the KAVACH, an indigenously developed Train Collision Avoidance System.

However, some incidents involving high-speed trains have been reported. Last week, a semi-high speed train between New Delhi and Varanasi experienced a technical glitch, causing passengers to be delayed for the third time in as many days.

Previously, a Vande Bharat Express train struck three buffaloes and a cow the next day in Gujarat.

In her article, Sona Mohapatra asks whether we should join Sajid Khan’s ‘culture of silence’