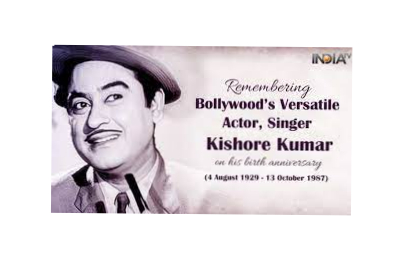 Kishore Kumar was a master of many trades. He was an actor and director, but it is his legendary voice that he is best remembered for. Kumar was born on August 4, 1929, in Khandwa, Madhya Pradesh. He gave voice to several generations of leading men including Dilip Kumar, Rajesh Khanna, Amitabh Bachchan, Dharmendra, Jeetendra, Dev Anand, Shashi Kapoor, and Rishi Kapoor, Sanjay Dutt, Anil Kapoor and more.

Here’s a look at some of his evergreen songs.

The soft and melodic jingle was sung by Kumar for the 1958 movie ‘Chalti Ka Naam Gaadi,’ which starred both himself and Madhubala.

‘Chingari Koi Bhadke’ from the 1972 Indian Hindi romantic drama film Amar Prem is a testament to Kishore Da’s tenor and range in both sound and tone.