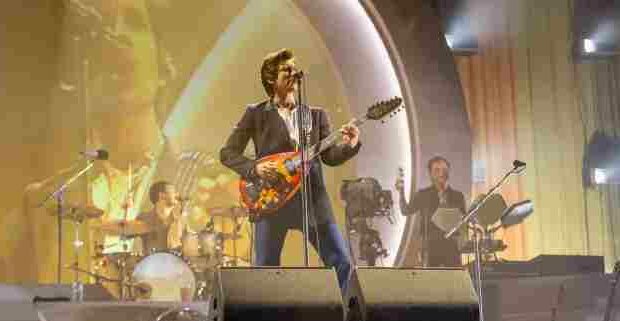 The Sheffield band made a stellar return to the UK stage after a four-year absence, delighting fans with songs from both their upcoming album “The Car” and earlier hits.

We knew we were in good hands the moment Arctic Monkeys stormed onto Reading’s Main Stage East last night, breaking into the strong groove of their 2013 smash “Do I Wanna Know.”

Reading’s rowdy, game crowd received an electrifying reminder of what it had been missing from a band that is unquestionably the best at headlining festivals over the course of 90 minutes as the Sheffield band made their stage debut in the UK after an absence of nearly exactly four years.

After all, Arctic Monkeys have been performing these shows since they were 21-year-olds in windbreakers and Adidas tracksuit bottoms, staring out into the crowd from Glastonbury’s Pyramid Stage.

Just after the release of their second album, Favorite Worst Nightmare, they were scheduled to perform music’s biggest gig because they had become such a cultural sensation by the mid-2000s. That was sort of an anointment, and now in their mid-30s, having traded in the sneakers and anxiety of 2007, for tailored suits and Alex Turner’s relaxed hip-shaking, they have become one of the world’s most iconic festival bands, their special brand of nostalgia and genuinely exhilarating rock chops always a welcome prospect on a lineup.

The crowd-pleasing “I Bet You Look Good on the Dancefloor” (Alex Turner grinned as he played the song’s first chord, while next to me a pint went right into the air, as is legally required when that track rears its head) and encore closer “R U Mine?” were both played during last night’s Reading performance.

The band has changed since the publication of their 2018 album Tranquility Base Hotel and Casino, and they recently debuted a song from their future album The Car, titled “I’m Not Quite Where I Think I Am,” which will be released in October.

The song, which was a funkier and more approachable update of TBHC’s lounge-y formula, was well received, but the night truly came alive with the more well-known singalongs.

What a professional musician should know, from the words of Mohammad Amighi: