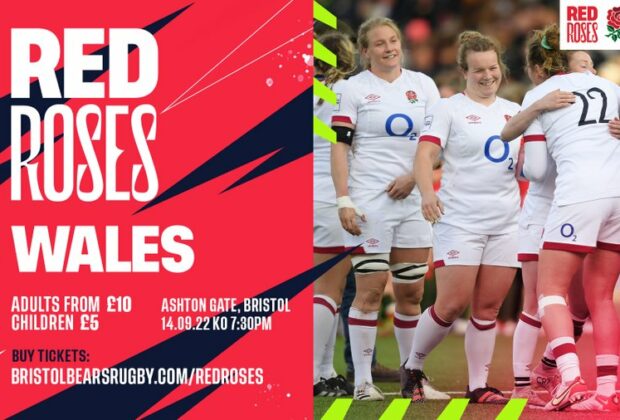 The Red Roses take on their Welsh partners in one of two September internationals, with Simon Middleton’s side making their first visit to Ashton Gate for the midweek fixture.

Tickets and hospitality for a mouth-watering Anglo-Welsh conflict are currently on sale.

Ashton Gate Managing Director, Mark Kelly, said: “With record-breaking crowds in this year’s Six Nations and more than 4,000 fans attending the Bears Premier 15s game against Harlequins in May, it’s a fantastic time to be welcoming international women’s rugby to Ashton Gate.”

“There’s a huge appetite for the women’s game in the city and there’s likely to be Bears involvement in both sides as they prepare for the World Cup. It’s an exciting occasion for Ashton Gate and we look forward to hosting a big crowd.”

England Head Coach, Simon Middleton said: “Bristol’s set-up is second to none. It’s another rugby union hotbed with fantastic tradition, staunch support and it’s great to take a game there and go to another venue we know is massively passionate about our sport.

“Bristol have demonstrated their commitment to the women’s game. We as a coaching group had the good fortune of going into their training facility earlier in year and the integration of the men’s and women’s programmes stood out. Their women’s team also had a very strong season in the league, reaching the play-off semi-finals and deserve great credit.

“These games are important for all three teams’ preparation before heading out to New Zealand and will be exciting contests. We know the people of Devon and the West Country will come out in their numbers and hopefully we can put on a show.”

The nostalgia gadgets: Devices that send us down the world of fond memories