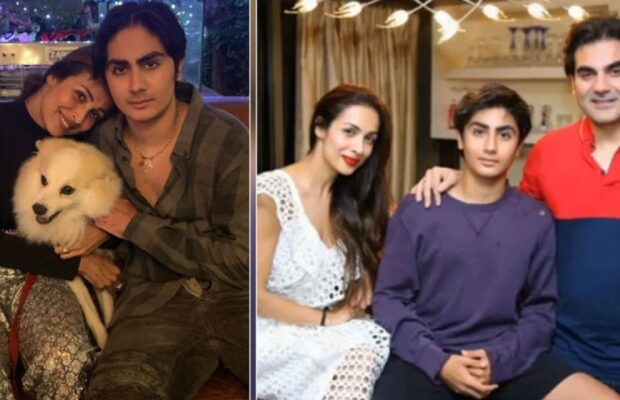 Malaika Arora wrote a heartfelt message in a post for her son Arhaan Khan’s birthday. Arhaan celebrated his 20th birthday on Wednesday. See this post for more information.

Arhaan Khan, the son of actors Malaika Arora and Arbaaz Khan, turned 20 on Wednesday. Malaika wished Arhaan with throwback photos on Instagram. To commemorate his special day, she wrote a heartfelt message for him. She referred to her son as’mama’s boy.’

She shared a picture of Arhaan from his childhood. She also shared a photo of him wearing swim goggles. She posted a photo of herself and her son with a puppy. Fans compared the birthday boy to his father, Arbaaz, based on a mirror image of Arhaan, who was most likely standing with his father. Arhaan was dressed in a vest and blue jeans.

Sharing the pictures on Instagram, Malaika wrote, “My baby boy is a grown up man today… but will always be my baby ( red heart emoji) happy birthday my arhaan (evil eye, cake, hug and heart emojis).” She used hashtags #20yearsold and #mamasboy on the pictures. Actor Bipasha Basu dropped a heart emoji on the post.

Reacting the pictures, one of Malaika’s fans wrote, “Just looks like Arbaaz Khan.” Another fan commented, “Happy birthday handsome.” Other fan wrote, “Sooo many best wishes for him…May he always have best health and brightest future…happy happy birthday….20x.” Many fans extended warm wishes to Arhaan and dropped heart and cake emojis for him.

Malaika and Arbaaz married in 1998. Arhaan, their first child, was born on November 9, 2002. After nearly 19 years of marriage, the couple separated and filed for divorce in 2017. Malaika opened up about her divorce on Kareena Kapoor’s podcast in 2020, saying, “It’s never, ever easy, like no other major decision in your life.” At the end of the day, someone has to be held accountable. You must always point the finger at someone. I believe that is how most people approach things.”

Arjun Kapoor is Malaika’s current boyfriend. In 2019, they made their relationship official. She recently revealed details about her relationship with Arjun, as well as what keeps them together. “The best thing about Arjun is that not only do I bond with him, but he is also my best friend,” she told Masala magazine. It is critical to love and fall in love with your best friend. Arjun gets me, he understands me, and he tells it like it is. I believe we are both each other’s biggest supporters.”

Dominic West says season 5 can give Charles a fair hearing in divorce from Diana: ‘There are two sides to every story’

Vijay Deverakonda’s shoulder injury has healed after 8 months: ‘The beast is dying to come out’