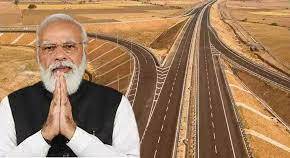 The 296-km four-lane expressway has been constructed at a cost of around ₹14,850 crore.

Prime Minister Narendra Modi is set to inaugurate the 296 km-long Bundelkhand Expressway in a programme in Uttar Pradesh’s Jalaun district today. PM Modi on Friday had said that the project will “boost the local economy and connectivity”

“Tomorrow, 16th July is a special day for my sisters and brothers of the Bundelkhand region. At a programme in Jalaun district, the Bundelkhand Expressway will be inaugurated. This project will boost the local economy and connectivity,” tweeted PM Modi.

Here are 10 things to know about the Bundelkhand Expressway:

1. The 296-km four-lane expressway has been constructed at a cost of around ₹14,850 crore under the Uttar Pradesh Expressways Industrial Development Authority (UPEIDA).

2. From four lanes, the expressway can later be expanded up to six lanes as well.

3. The expressway is set to give a major boost to connectivity and industrial development in the region – resulting in the creation of thousands of jobs for the local people.

4. It extends from NH-35 at Gonda village near Bharatkoop in Chitrakoot district to near Kudrail village in Etawah district, where it merges with the Agra-Lucknow expressway.

6. The foundation stone of the expressway was laid by Prime Minister Narendra Modi in February 2020. The work on the Expressway has been completed within 28 months.

7. Work on the creation of an industrial corridor in the Banda and Jalaun districts – next to the expressway has already begun.

8. According to PM Modi, the local economy will benefit tremendously due to the expressway. “There will be great industrial development in the region and this would bring more opportunities for the local youth,” he said.

9. According to the Prime Minister’s Office (PMO), the government has been committed to enhancing connectivity across the country – a key feature of which has been the work towards improvement in road infrastructure.

10. Elaborate security arrangements have been made in Jalaun ahead of PM Modi’s visit. An intensive checking campaign is also being conducted in all the hotels and restaurants of Orai, the district headquarter.