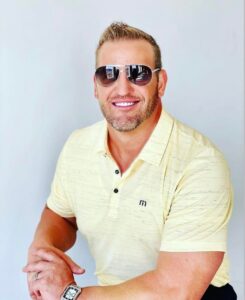 Brad has successfully created a Utah based business that provides luxury vacation rental homes in the most popular Utah Hot Spots including Salt Lake City, St. George, Moab, and now Park City. No other local Utah company has ever done this! After 15 years in the business, Brad and Utah’s Best Vacation Rentals are now staged to expand into other states across the country as America’s Best Vacation Rentals.  Brad has built 15+ companies over the past 25 years that have collectively grossed more than $125 million dollars in revenue and have created countless jobs and greatly benefited his community and local economy.

Brad is a top real estate agent, former athlete who was All State in baseball and basketball at Murray High School, drafted by the Minnesota Twins in 1994 and holds multiple baseball records for Homeruns, RBI’s, Batting Average and Hits. Brad compiled many impressive awards and honors thru-out his illustrious baseball career including being selected as the Utah “Gatorade Player of the Year” in 1994, playing in the Area Code Games twice for the Houston Astros and the Colorado Rockies, with teammates like Torii Hunter, Derek Lee and Paul Konerko who all had successful MLB careers. Brad also had the rare opportunity to play (two) years in America’s #1 Premier College Summer Baseball League, for the Wareham Gatemen, in the Cape Cod League. He played with and against some of the game’s best including his roommate, Lance Berkman who is a retired MLB All-Star and World Series Champion who played for 15 years for the Houston Astros, New York Yankees, and St. Louis Cardinals and made over $115 Million Dollars in his career. Among Brad’s most notable awards was leading his team in hitting as a freshman and becoming an All-American and the WAC “Freshman of the Year” at BYU. Brad was an exceptional baseball player and was very consistent and compiled an impressive body of work over his 4-year career at BYU hitting 49 career home runs and an impressive .396% career batting average. Brad learned how to become successful in baseball and has applied the same work ethic and discipline that helped him become one of the top 1%, to his successful real estate career and family.

Brad is still very involved in baseball which is a sport that taught him so much on and off the field. He has coached his boys for 20+ years and was an assistant varsity coach who helped build the program for Corner Canyon High School where he coached for 4 years. Brad has been paying it forward and has been actively involved in baseball still. Brad is currently serving as the President of “The Sons of Baseball,” which was founded in Utah but is expanding across the country and is like “Make a Wish” but with a Baseball Twist. Brad is also the Founder and current President of The Utah Vacation Rental Managers Association, a nonprofit bringing all the professional vacation rental managers together to preserve and protect the best interests of the industry in Utah. Brad has played a key role in working with the Utah legislature to change laws and be an advocate for vacation rentals in Utah.

Brad has learned multiple key elements of all facets of his business in Real Estate, Mortgage and Finance, Credit building and Repair, Home Flipping, Home and Land Development, Construction and Floor Plans, Remodeling and Home Improvement, Property Management, and Vacation Rentals. With all this experience and the desire, he had to hold multiple licenses in all these fields, Brad has been able to gain more experience than most and have multiple streams of income through diverse yet complementary businesses.

A Company Must Constantly Grow and Evolve to Survive – Lorraine P. Jordan