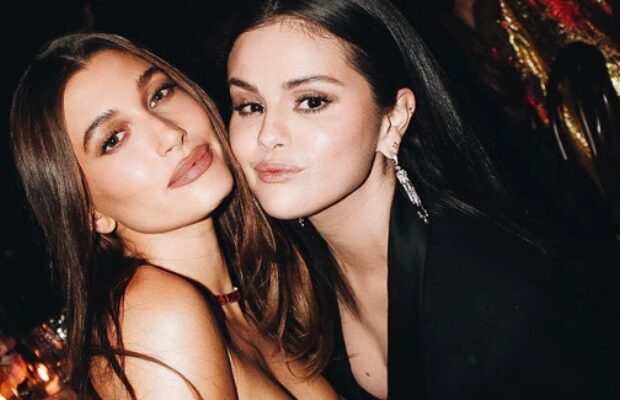 The ladies showed the highest level of maturity after Bieber’s explosive podcast admission.

For years, Justin Bieber fans have bombarded Hailey Bieber’s social media channels, calling her a homewrecker and telling her that he only cares about his ex, Selena Gomez.

Gomez had been relatively quiet about the drama, preferring to keep her distance from it, but a recent interview with Hailey Bieber changed all of that.

In a show of solidarity, her comments prompted a heartwarming reunion for the two young women who dated the Canadian pop star (and to whom Hailey is now married).

For the first time, they were photographed together looking happy and chummy at last night’s Academy Museum Gala. This highly public appearance flips the age-old narrative of ‘true love’ versus ‘new partner.’

Hailey Bieber has been open about the trauma inflicted on her by Jelena (Justin and Selena) fans over the years, telling Elle in early 2021 that she ‘just wanted to hide’ at the start of their marriage.

“I remember someone telling me that (turning off public comments) really lowers your engagement,” she added. And I was like, ‘I don’t care about engagement!’ People are frightening me. Enschagement, engagement ‘I don’t mind!'”

In a recent interview with Alex Cooper for Call Her Daddy, she addressed the barrage of negativity yet again. Bieber explained that when she receives online abuse, her life spirals downward. “You can start thinking it’s not worth it anymore or that you don’t want to be here,” she admitted candidly.

The Rhode Skin founder has developed a thick skin, but she admits that the experience has made her feel very isolated from the rest of the world.

On the podcast, Bieber also addressed rumours that she had’stolen’ her husband from longtime partner Selena Gomez. This is one of the main claims made by fans in their online abuse.

She cleared the air, claiming that she never dated Justin while he was dating someone else.

“When he and I first started hooking up or anything of the sort, he was never in a relationship – ever,” she stated emphatically.

“It’s not in my nature to interfere with someone’s relationship – I would never do that,” she added. “I was brought up better than that.”

“I’m not interested in doing that, and I never have been,” she said.

She did go on to say that when Bieber and Gomez called it quits for the last time, they ‘closed a chapter.’ “I think moving on was the best thing that could have happened for him,” she explained. “It was the most mature, healthy decision he could make.”

It didn’t help that Hailey and Justin got engaged and moved in together just a month or so after reconnecting. They were also married quietly in a courthouse in September of the same year. It was a whirlwind romance, and Jelena fans weren’t ready to let go of the couple after years of support.

Hailey claims she has spoken directly with Gomez and that they have no animosity toward one another, but she also admits that Gomez has done nothing to stop the bullying.

Tyrell Hampton, the photographer, captioned the photo ‘plot twist,’ referring to the feud.

While the comments ranged from ‘world peace has been found’ to ‘THE INTERNET IS GOING TO BREAK,’ there’s no denying that it’s a beautiful thing to see women band together rather than pull each other apart. It’s a true testament to the maturity and grace of both of these successful female entrepreneurs that they could put aside their differences and tell the world, in not so many words, to get over the past and move forward – as they clearly have.

Gomez is set to release a documentary called Selena Gomez: My Mind & Me on Apple TV+ in early November, so we’ll have to wait and see.

Among the 10 most beautiful women in the world, Deepika Padukone is the only Indian. Here’s who topped the list