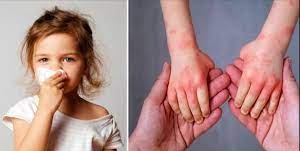 It is not yet known if the flu is brought on by a brand-new virus or a side effect of an existing infection.

According to a recent correspondence between medical professionals from India and Australia published in The Lancet Respiratory Medicine last Wednesday, a potential new virus known as tomato flu or tomato fever has been discovered, affecting predominantly children in the state of Kerala in India.

Tomato flu: what is it?

It is said that the suspected virus is endemic and is not thought to be life-threatening. The list of symptoms also includes rashes, body aches, exhaustion, nausea, and diarrhoea. According to the communication, the flu may be a complication of childhood dengue or chikungunya fevers or a new type of hand, foot, and mouth illness.

The red, uncomfortable blisters that spread throughout sufferers’ bodies and progressively grew in size until they resembled tomatoes are where the flu earned its name. The communication indicates that the blisters mimic those brought on by monkeypox.

On May 6, 2022, the flu was discovered for the first time in Kerala’s Kollam district; as of July 26, the state had infected more than 82 kids under the age of five. In the Indian state of Odisha, 26 cases involving children between the ages of 1 and 9 were discovered. India’s other areas have not recorded any incidents.

How do you treat tomato flu?

The flu generally resolves itself without the need for treatment and no specific drug exists to treat it as of yet.

The correspondence warned that the tomato flu is very contagious and that any patients or suspected patients should be placed in careful isolation and that other precautionary steps should be taken as well. Isolation should continue for 5-7 days from symptom onset.

While the correspondence stated that the cause of the flu was unclear, Dr. Suresh Kumar Panuganti, pediatrician, Yashoda Hospitals Hyderabad, told The Hindu that the flu is caused by Coxsackievirus A16, one of the viruses associated with hand, foot and mouth disease in infants and young children.

The wedding of Sarah Hyland was essentially a Modern Family reunion